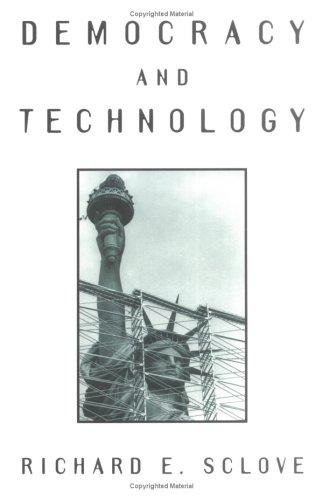 " According to Richard Sclove, technology has a profound effect on the way we structure society, yet citizens rarely if ever participate in the development of new technologies or in the making of public policy. Instead, "many of the most important technology decisions are made today via a covert politics that occurs within corporate headquarters and government bureaucracies or via the tacit politics of the economic marketplace." Procedures and institutions need to be developed, Sclove argues, through which citizens can participate in exploring the pros and cons of new technologies as well as overseeing and, if necessary, regulating, their development. It's a strong argument and echoes the concerns of other critics of technology such as Langdon Winner and Jerry Mander.

In the opening pages of Democracy and Technology, Sclove contrasts the experience of a small Spanish village with that of the Old Amish in Ohio to illustrate two different approaches to technology. When running water was installed in the homes of Ibieca, a community in northeast Spain, the people no longer depended for water on the public fountain. Since the fountain also served as the village's social center, the lively interaction and public talk that used to take place there died away. Over the course of a few years, the social fabric of the community began to unravel. By contrast, the Amish engage in a process of extensive public discussion and democratic ratification before new technologies are adopted. While they do not reject all modern technology, the Amish recognize that some are more threatening to their community and its values than others.

The methods the Amish have developed offer an example of what Sclove calls "a democratic politics of technology." He documents a number of cases where such mechanisms have been developed ? in workplaces, communities, and even whole countries. For example, the Dutch have created a network of 50 public "science shops" that conduct, coordinate and summarize research on social and technological issues in response to specific questions and concerns posed by community groups, public-interest organizations, local governments, and workers.

While Sclove's primary focus is on finding ways to bring more democracy into technology, he also examines some proposals for bringing more technology into democracy, such as electronic town meetings, "virtual community," and deliberative opinion polling. He warns that these mechanisms sacrifice intimacy, diminish the sense of face-to-face confrontation, and increase the dangers of elite manipulation. Still, he acknowledges that some new communications technologies open up the possibility of "electronic public space" or "virtual commons." "